Myomectomy is a surgical procedure to remove uterine fibroids — also called leiomyomas. These common noncancerous growths appear in the uterus, usually during childbearing years, but they can occur at any age.

The doctor`s goal during myomectomy is to take out symptom-causing fibroids and reconstruct the uterus. Unlike a hysterectomy, which removes the entire uterus, a myomectomy removes only the fibroids and leaves the uterus intact.

Myomectomy is recommended for fibroids causing symptoms that are troublesome or interfere with ones normal activities. The reasons to choose a myomectomy instead of a hysterectomy for uterine fibroids include:

What are the treatment options and which one is best for me?

While up to 75 percent of reproductive aged women in certain populations may have uterine fibroids during their lifetime, the percentage of women who experience symptoms are fewer, about 25 percent. Treatments for symptomatic fibroids range from medications like pain relievers and hormones, such as oral contraceptives, to minimally invasive procedures like uterine artery embolization, HIFU to surgeries such as myomectomy or hysterectomy.

What you can expect
Depending on the size, number and location of fibroids, surgeon may choose one of the following surgical approaches to myomectomy. 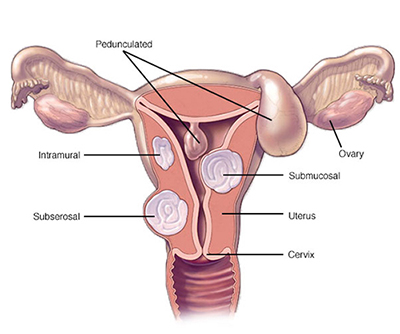 Laparoscopic and robotic surgery use smaller incisions than abdominal or open myomectomy does. This means that one may have less pain, lose less blood and return to normal activities more quickly than with a laparotomy.

Rarely, your surgeon may use a laparoscope inserted through a small incision in your abdomen to view the pelvic organs and monitor the outside of the uterus during a complicated hysteroscopic myomectomy.

After the procedure
One can expect some vaginal spotting or staining for a few days up to six weeks, depending on the type of procedure one has had. One should defer prom pregnancy till about 3 months from surgery to allow for complete healing of uterus.

Why would I choose a minimally invasive procedure instead of a traditional surgery?